The first time I had heard about the Death of Wolverine was from a Marvel panel I attended at C2E2 in 2014. I believe this was actually the convention where the news broke about this mini-series event. Finding it hard to believe that Marvel would really kill off one of its largest money-makers, I was intrigued with the premise at the very least. Hearing Charles Soule on the panel discuss how much time, care, and research he was putting into these four issues piqued my interest, and knowing that artist Steve McNiven was working on the book too was all I needed to hear. By the end of the panel I found myself upset that I had to wait five months for the single issues to drop in stores!

I missed out on reading some of the books leading up to the Death of Wolverine. I did however read the first four issues of Wolverine with Paul Cornell and Ryan Stegman, but dropped the book after Stegman left. While I wasn’t keeping up with the monthly reading, I was still keeping tabs on Wolverine’s status regarding his healing factor and knew of the Three Months to Die storyline and understood how it set up the Death of Wolverine.

To simply set the stage, we begin this mini-series off with a powerless Wolverine worried about his healing powers. This worry propels Logan to seek help and visit Mister Fantastic Reed Richards, who cannot figure out what is wrong with him and wants to work on reactivating the healing factor. Richards asks Wolverine to lay low for a while. Wolverine is afraid that word will spread and that some (of his many, many) enemies will catch wind and come looking for him so he decides to hit the road. While trying to remain low key in Canada, Logan informs a local bartender what may happen and what to do if anyone comes looking for him. As it turns out, Nuke, the rambunctious nationalist with the American Flag tattooed on his face, is the first to search out Wolverine. Walking into an ambush, Nuke and his men are absolutely pummelled and left a bloody mess. A helpless Nuke then informs Wolverine that there is a bounty on his head, and that the bounty in fact decreases the longer it takes to capture him, and he must be taken alive. Nuke then reveals to Wolverine that the hit came from Madripoor and was put out by none other than Viper (who, for whatever reason, has a chained up Sabretooth by her side). But is she really the person behind it all?

The tale that this creative team weaves through Logan’s journey to solve this mystery begins to unravel, diving headfirst into bombastic action scenes at sometimes breakneck speeds, which all perfectly suit the character. Unafraid to switch his style up, McNiven will sometimes focus on heavier pencils over inks which creates a more visceral dynamic. The flashback fight scene between Wolverine and Sabretooth is both beautiful and absolutely gut wrenching.

Charles Soule has a knack for hitting the quieter character-based moments in this book as well. There is a scene in Madripoor which sees Logan having a conversation with Kitty Pryde, and they have an intense heart-to-heart in which Logan admits he doesn’t want to die, but he is without a healing factor and has to face reality.

The encounters with Abraham Cornelius, and even Ogun, tug at the heartstrings. Logan finds Cornelius continuing to work on people (or “fodder” as stated by Cornelius) as he wishes to enhance their skills far beyond Wolverine’s. One panel in particular towards the end of the story helped give us a glimpse at the true remorse and absolute disappointment Cornelius had for what he did to Logan – not because the Weapon X program was wrong, but because he didn’t get it right the first time with Logan. 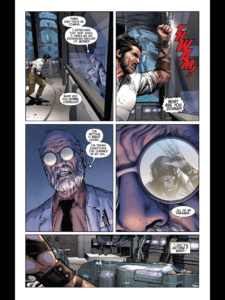 Truth be told, I have not read the Death of Wolverine since it was released in single issue form. After much time away from this story, I have decided to read it again and view if with a fresh new set of eyes, and am I glad I did. I am not going to lie, I was a little disappointed with this story. Wolverine is a character known for being the best he is at what he does, and what he does isn’t very pretty. I was expecting an ugly send off for this character. Between Sabretooth and Lady Deathstrike you may think someone would have just torn Logan apart limb from limb, leaving nothing more than a bloody mess and a broken adamantium skeleton behind. You might think it was a personal murder at the hands of Viper or Ogun, but it wasn’t. It was Wolverine going out by facing off against the man who started it all, Abraham Cornelius. It was a heroic death simply to save the lives of the victims of Cornelius’ experimentation, both present and future. It was a fascinating end where Logan reflects on his life in those dying moments and remembers all the good he has done in and for the world. It was a fitting death that the adamantium, the metal that helped to shield his skeleton, making him invincible for all these years, was the very metal to take him out. It was a fitting conclusion watching Wolverine crawl as far as he could just to face the sunset as the adamantium cured around him and cocooned him inside. It was a quiet death, the one that Logan deserved.